"It really was sublime, so funny, so quintessentially British, so divinely nostalgic and with such a lightness of touch: bravo! I love old-fangled humour like that, so fond and gentle.

"Congratulations on the production yesterday which we enjoyed immensely. It was great fun, full of great gags, and bubbled away very successfully right to the end. You made a lot of people laugh a lot yesterday. Well done. Encore?"

"What a spiffingly good show!  We laughed and laughed and all thoroughly enjoyed it and  came home still laughing. So thanks so much and can we have some more please"

(who painted the magnificent radio backdrop)

"There’s so much that’s rich for performers it’s an almost "die for" show!! I REALLY think that anyone who sees this will love it. It’s so well wrought and so much fun. Really well done - it was fantastic."

"The HOUND of the BASKERVILLES"  -  A Thrilling Parody

Absolutely brilliant , included some current stuff, with jokes about Brexit and alike . I had a grin from ear to ear throughout. Loved it.

An enjoyable and very silly way to spend a Sunday afternoon in the company of the BCC. The four actors, pianist and sound effects man all performed with gusto and numerous accents.

Great fun on a Sunday afternoon - congratulations to all the cast including excellent sound man and pianist. Huge range of accents from the four actors.

Terrific afternoon. An epic tale brought to life by only 4 actors and a super sound effects guy who should have taken his place on stage with the cast at the end.

A splendid way to spend a Sunday afternoon. A corking wireless play ... catch them if you can. Can't wait for their next show!

Thoroughly enjoyed this show, a very slick, clever production.  Ad Libs were brilliant! We would definitely like to see this company again.

This was probably the best Sunday afternoon we have had in a long time. A witty script, versatile actors and inventive sound effects all added up to a perfect performance.

Do you have a 6-star rating option? That is what I would give to this gem of a production. These are actors with a capital A! It was a rollicking, guffawing experience, totally enjoyable and delightful and I couldn't recommend it more highly. Go see it if you can, you won't be disappointed. I would see anything by the British Comedy Company now that I have gotten to know them :)

Laughed my head off!! A joyous afternoon. Perfect to lift the spirits when all around seems doom and gloom.

The very best of witty satire from a truly gifted ensemble of writers & performers ... this marvellous production.

Truly a labour of love. BCC Radio program set, with a parodied script, this collection of characters filled the room with laughter and so much fun, with their delivery, antics, ad libs, and so much more. All filled out in textures of piano following and shifting moods. And special mention to young Wear at the sound effects table, manual, vocal and digital, at times seeming to be limbed more like an octopus. The venue could not have been more warm, welcoming and supportive. What a delightful way to spend a Sunday afternoon.

Hugely enjoyable parody of the Hound of Baskervilles, that was suitable for all ages. Peter Wear has written a personal, witty and dramatic script, and both the actors and the audience were guffawing out loud. Many of the sound effects were live: it was great fun to see balloons being popped to simulate gunshots and coconut shells for horses clip clopping on cobbled streets. Reminiscent of the Goons, the acting was OTT and there was spontaneous applause for some of the funniest ham performances. Do go and see this gem - I would love to see their last show '39 Steps - I counted them'!

What a fantastic piece of writing. The four actors played so many characters so skilfully. Comic brilliance in places which proceeded at very fast pace with many 'laugh out loud' moments. Brilliant miming with immense energy. Great piano playing and inventive use of sound effects. Excellent comic timing. I had a wonderful afternoon. Thank you all SO much. Will definitely be coming to see another show.

A great afternoon's entertainment. Clever script, good delivery, pleasant venue. Hope that that this will not be the only performance so that others may enjoy it. 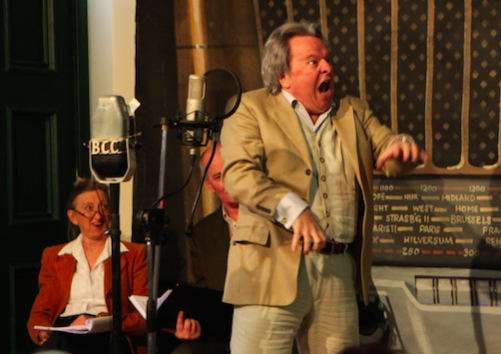 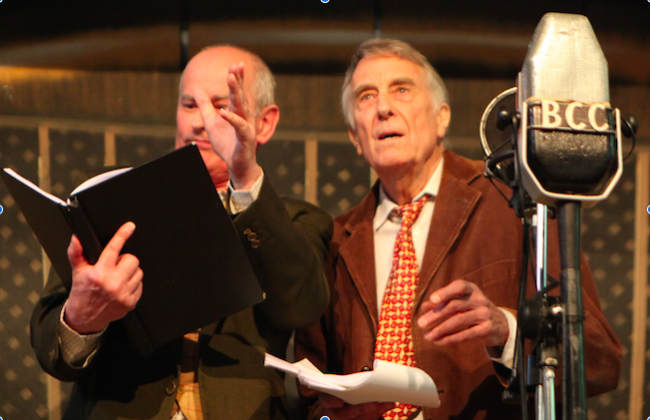 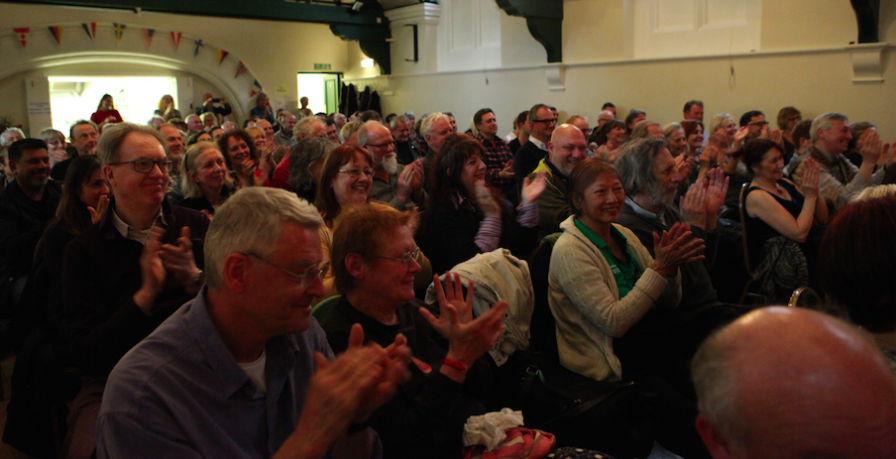 And from the Sherlock Holmes Society of London Journal

A Comedy of Terrors  -  ‘The Hound of the Baskervilles’

Written by Peter Wear performed by the British Comedy Company.

This extremely accomplished production merits great praise. It is written with great comic judgement allied to true love of the Canon. The small company, doubling up to take multiple roles, delivered this Hound with pace and a disciplined teamwork which kept the laughs coming. Peter Wear had avoided all the traps which ensnare lesser writers by choosing the simple expedient of reading the story straight from the Strand and drew unsuspected humour from the text.  With expert sound effects provided by Tiff Wear, including a sound recreation of the dread Grimpen Mire (the suction of a rubber bathroom plunger in a bowl of water), the audience was enraptured and the Dartmoor of Gothic horror brought to life.

There is no good reason why Mrs Hudson should not have been an Irish girl, and Flip Webster discovered all the comic possibilities this created, only to emerge later as a true Devonshire lass when she took the part of Mrs Barrymore and as an ingénue cut glass accented Laura Lyons.  Peter Wear gave us a splendidly dotty Dr. Watson with Holmes as a straight man, played with great confidence by Jack Vaughan.  The wonderfully versatile Steve Steen took roles ranging from the Canadian burr of Sir Henry Baskerville to a London cabbie full of zany, right-wing opinions.  Piano accompaniment by Professor Anthony Ingle added greatly to the charm of the performance and providing necessary dramatic impetus to rapid changes of scenes and locations.

This was a marvellous comedy evocation of the Hound, full of gentle British humour. It is not to be missed. 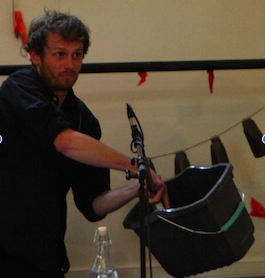 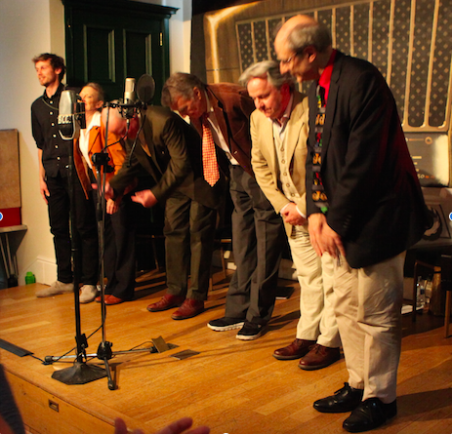 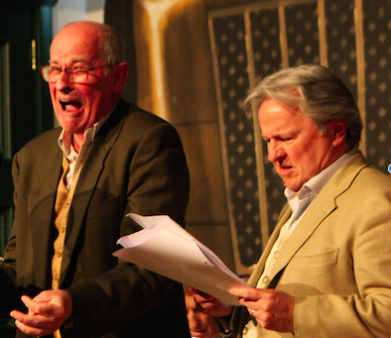 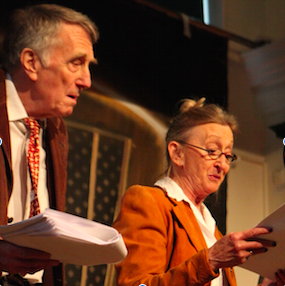 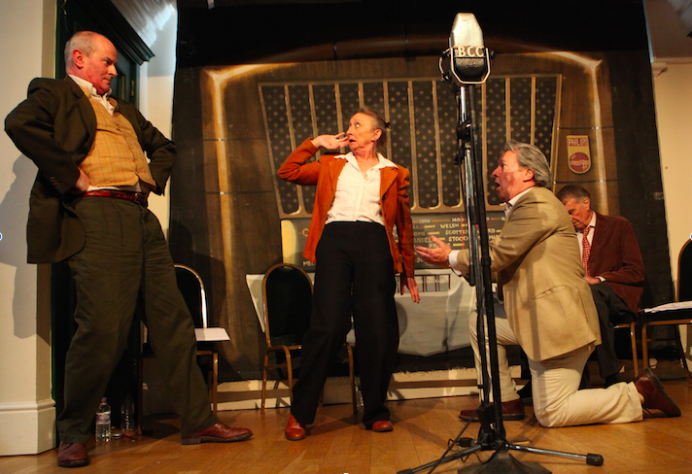 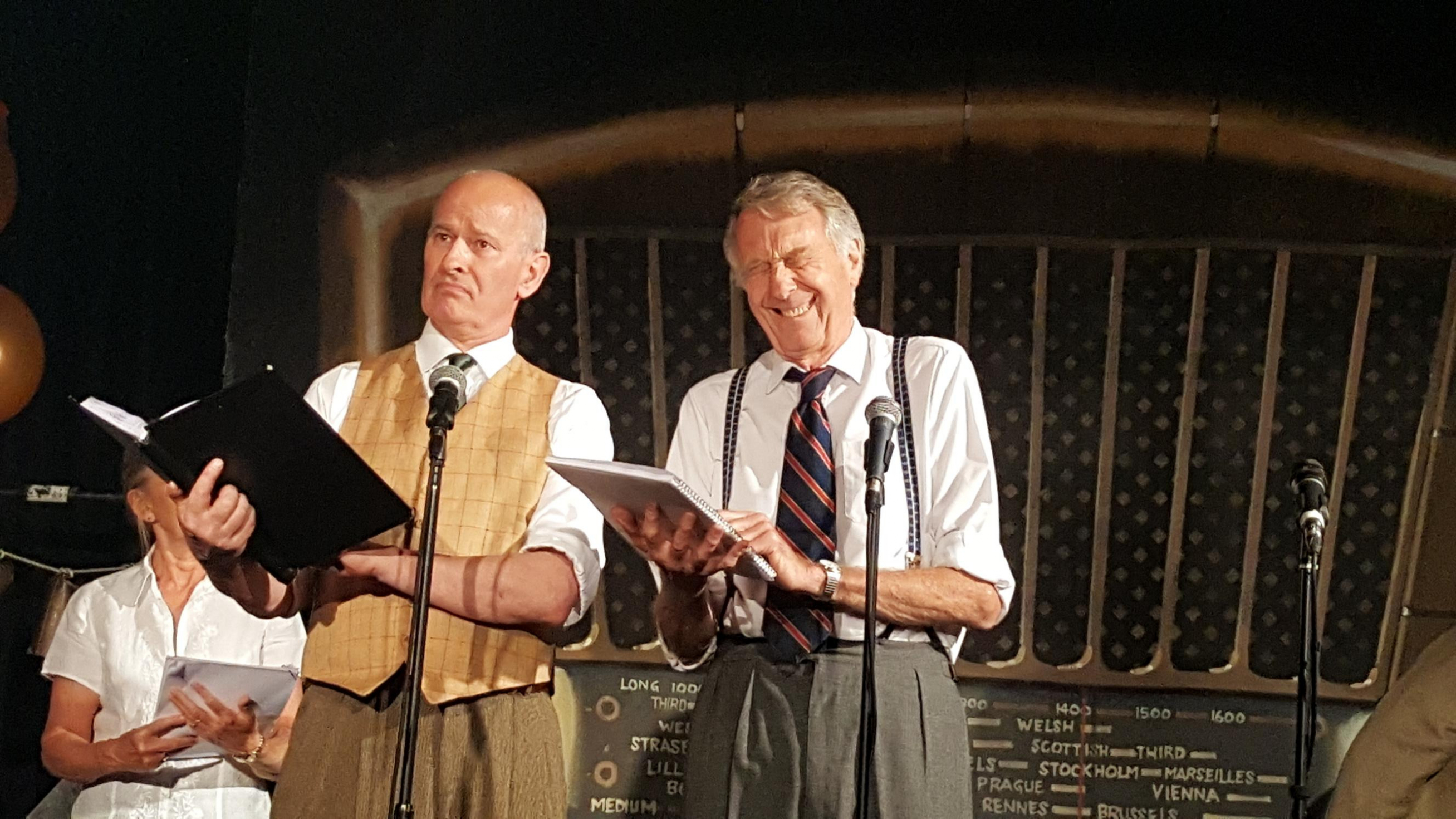